We could not have ordered a more auspicious growing season for the debut vintage of the Pulido~Walker Estate Chardonnay. Conditions were ideal: ample spring rains, mild summer sun, cool marine influence, and no major heat spikes allowed fruit to hang for one of the longest stretches in recent memory. After the challenges of 2017, with its brutal Labor Day heat wave and October wildfires, 2018 will likely go down as one of those highly memorable Napa Valley vintages born of an entirely unmemorable growing season.

Pulido~Walker Estate Vineyard is meticulously planted, based on several years of data collection prior to putting a single vine or rootstock in the ground. There is a slight but traceable history of Chardonnay plantings on Mt. Veeder, which persuaded Mark Pulido and Donna Walker to dedicate three acres of cooler pockets on the site to Chardonnay. They researched moderately yielding, intensely fruited, super-high-quality vines and chose the Wente clone that has done so beautifully in the area, especially in the cooler southern reaches of Napa Valley.

Mark and Donna like to keep things interesting, so we went for the Montrachet clone as well, and rounded out the selection with cuttings of what is likely the original Robert Young Chardonnay clone from the B. Thieriot Vineyard on the Sonoma coast.

Winemaking & Tasting Notes
Because the Robert Young clone was planted a year later than the others, the inaugural Pulido~Walker Estate Chardonnay is a blend of the Wente and Montrachet clones. We began with eight barrels of the Montrachet and half as many of the Wente, tasting all twelve individually. The final blend consists of three of the Wente barrels and two of the Montrachet. We had a clear preference for the wines aged in new oak, which firmed them up while adding a modicum of brioche.

This is a wine I really can’t compare to anything I’ve tasted recently. It is more citrus than tropical, with a mild honeyed quality akin to the hint of botrytis in a Sauternes or Tokay. The wine is appealingly reductive, a Burgundian trait that adds a note of white chocolate. At the same time, it comes across as broad shouldered, meaning the 2018 Pulido~Walker Estate Chardonnay will age well. If you can cellar some for a year or more, it will not disappoint. 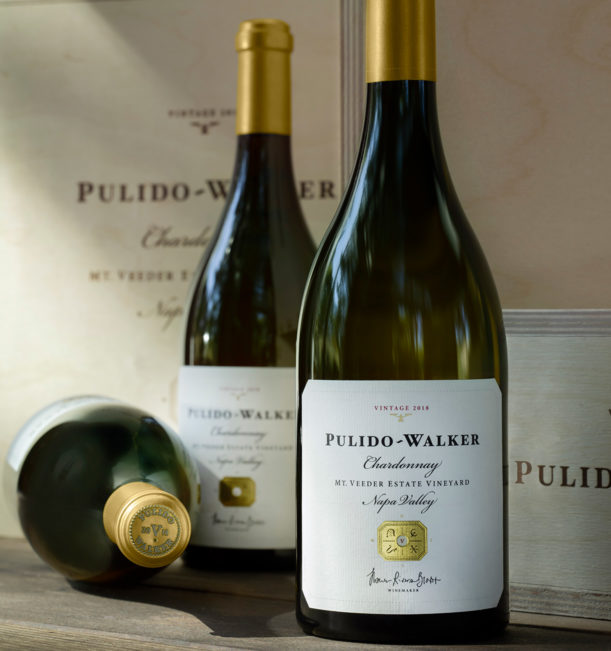