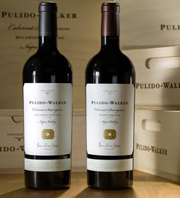 Preview of the 2013 Release

“2013 may turn out to be the finest vintage I have experienced in tasting North Coast varietals over the last 37 years. It’s a game-changer in terms of the consistency of quality, the depth of quality, and the across-the-board excellence for so many wines.”
—Robert Parker, Wine Advocate, #221, October 30, 2015

2013 Pulido~Walker from Panek Vineyard (Release date February 2016)
Earlier vintages of the Panek Vineyard Cabernet Sauvignon demonstrate generous valley floor qualities like caramelized sugar and maple syrup, resulting from a mix of red and black fruit. One striking difference is that the 2013 vintage is bigger and more structured, owing to the preponderance of black fruit. This wine is the finest expression of the site thus far.
—Thomas Rivers Brown, Winemaker

2013 Pulido~Walker from Melanson Vineyard (Release date August 2016)
Those who assumed the Melanson Vineyard Cabernet Sauvignon reached the pinnacle of quality last year weren’t wrong. And yet, the 2013 vintage is even more astonishing. Every aspect of the fruit is showing in ideal form in our wine—producing the best wine ever from this remarkable vineyard.
—Thomas Rivers Brown, Winemaker

“The story of 2015 is early, light, and concentrated. Unfortunately not much quantity but what Pulido~Walker got is incredibly good. Coming out of fermenter, I’d say the wines could rival 2013 in intensity.” 
—Thomas Rivers Brown

Pulido~Walker Cabernet Sauvignon wines were featured at one of the Robb Report Car of the Year (RRCTY) driver dinners in San Diego, CA. While attending the event, Proprietor Donna Walker had the once-in-a-lifetime opportunity to drive and judge the spectacular line-up of 13 cars in contention for the RRCTY 2016. The McLaren 650S Spider, Mercedes-AMG GT S, and Lamborghini Aventador LP 750-4 Superveloce Roadster were her favorites. She said, “Driving these high performance cars was like unleashing a sleek, caged animal to the wild!”

On October 20 and 21, nearly five thousand pounds of Pulido~Walker Estate olives were harvested. The olives were then rushed to the mill and in just a couple of hours the bright green aromatic oil was pouring out. With the maturity of the new grove planted in 2012 and the addition of more Frantoio, Leccino, Cerignola and Aglandau trees, the profile of Pulido~Walker oil has changed with added complexity and a more fruity aroma. Certified extra virgin by Applied Sensory Services, Pulido~Walker Estate Olive Oil will show well in upcoming competitions. This new oil is green in both aroma and taste with green almond, tomato leaf and grassy fruitiness with a well-balanced bitter and pungent taste. 
—Marvin Martin, Jr., Consultant Orchard Manager/Oil Maker 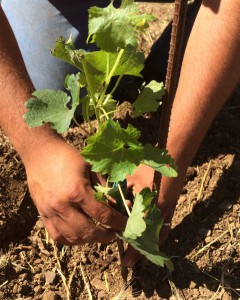 When do you anticipate having the first usable crop from the new Pulido~Walker Estate Vineyard?

The first crop is expected in 2017 in both the Cabernet Sauvignon as well as the Chardonnay blocks. However, we frequently will just drop this fruit on the ground in an effort to fully establish the vines and maximize the long-term quality objectives we have for the site. This is generally a very small amount of fruit. With that being said, it would be more realistic to plan on usable, high quality fruit in 2018. The inaugural Pulido~Walker Estate Chardonnay would then be released in 2020 and the Pulido~Walker Estate Cabernet Sauvignon would be released in 2021 after 20 months of barrel aging.

What are the challenges and advantages of planting vineyards in “virgin soil?”

There are really only advantages when developing a “virgin or first growth” site such as the Pulido~Walker Estate. Generally speaking, the overall soil health is much better due to not being farmed before and not having years of herbicide use, fertilizers, etc. In addition, there has been minimal compaction and the beneficial fungi and bacteria are (soil food web) in good balance. When we planted the vineyard, each planting hole (each vine) received 1 pound of compost, one cup of vermicompost (worm castings), one Mycorrhizae packet (teabag of beneficial bacteria, etc.), and .5 pounds of organic bone meal to serve as a long-term Phosphorus source. All this was done in an effort to maximize long-term soil and vine health.

Our Estate Ambassador Daniel Ha was inspired by the bountiful fall harvest of red and golden beets in the Pulido~Walker Estate gardens for this recipe. Enjoy with a glass of 2012 Pulido~Walker from Melanson Vineyard!

2) Place the onions, celery, carrots, and garlic in a large bowl. Add the rosemary, thyme, start anise, and cinnamon stick, then set aside.

3) Cut the ribs between the bones, and trim all the excess outer fat. Season the ribs well with coarse salt, then dredge in flour until well coated.

4) In a large Dutch oven or wide soup pot, pour in enough oil to coat the bottom of the pan. On high heat, sear the ribs so they are browned well on all sides (about 3 minutes per side). Set aside. In same pan, transfer all the vegetables from the bowl, and stir to caramelize and pick up all the brown bits. Add the meat back into the pot. Pour the wine over. Ensure all is covered and if not, top up with water. Sprinkle on the cocoa powder and add the brown sugar, bring to a boil, cover with a lid or foil, and place in the oven till meat is fork tender, about 3 hours.

5) Remove the ribs to a platter and strain out the solids.

6) Boil the cooking liquid in a wide shallow pan until it is reduced by half. It will be richer, more flavorful and thicker. Add a couple of tablespoons of butter at the end for sheen and flavor.

7) Serve on a mound of garlic mashed potatoes, topped with sautéed haricot verts.

We are pleased to share with you our seasonal newsletters.