The 2014 Pulido~Walker from Melanson Vineyard signals a return to a more familiar profile: plenty of structure in a wine that has shown almost perfect balance from the start contrasted to the 2013 Cabernet Sauvignons from Pritchard Hill which were especially intense. Rather than working to tame the tannins, 2014 has been about allowing them to frame the finish. Each element is present in near-ideal proportions thanks once again to our base lot of Clone 7 blended with Clone 337 to punch up the fruit.

As the 2013 Napa Valley vintage continues to rack up accolades, Pulido~Walker winemaker Thomas Rivers Brown is well pleased with the refreshing transparency he sees in the 2014 vintage. The third in a trifecta of idyllic Napa Valley growing seasons despite prolonged drought conditions, 2014 is showing greater varietal and site expression across the valley. These wines are differentiating themselves early, which promises to give wine lovers a reason to taste widely and explore wines of distinct character.

Winemaking & Tasting Notes
In 2010, we fell in love with the Clone 7 that is so consistently produced in the Melanson Vineyard. On its own, the flavor is predominantly savory and, we’ve learned, that blending the brighter, red-fruit character of Clone 337 makes just the right complement to Clone 7’s dense, blacker nature. Add in the crushed rock qualities of the hillside site, and the 2014 Pulido~Walker Melanson Vineyard is a modern Napa Valley classic, with good fruit character, detectable acidity, and a clear and compelling Pritchard Hill signature.

The 2014 vintage fully expressed its traits early on. At bottling, everything that we sensed in the wine made itself apparent and was bottled at near perfect balance. Like previous vintages of Pulido~Walker from the Melanson site, the striking harmony achieved in this Cabernet Sauvignon will certainly be enhanced with age. 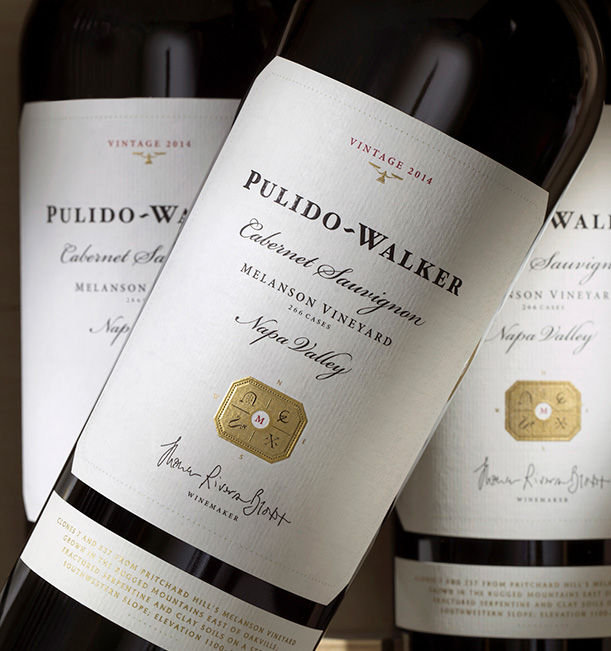